A bird that we are quite often asked about, especially by first-time visitors to the Algarve, is the Common Waxbill (Estrilda astrild). 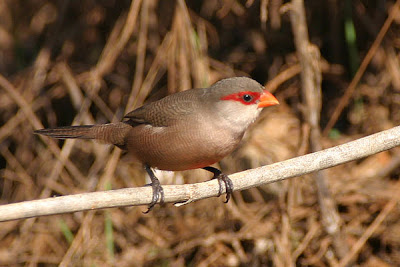 This isn’t because Common Waxbills are rare or even because they are hard to identify. In fact they really are quite common and they’re very distinctive and pretty much unmistakable. No, the reason for the regular questions is that the species is missing from several of the popular field guides and even the Collins Guide hides it away at the back amongst the introductions and escapes. As a result, many people are just not expecting to come across them.

Common Waxbills are native to sub-Saharan Africa and widely distributed there. They were introduced to Portugal in the 1960s and are now well established and apparently thriving. Accounts of exactly where and when they were introduced vary: The Birds of Africa (Vol. VIII) refers to c100 birds introduced or escaped near Lisbon in 1964; the excellent website www.avesdeportugal.info has the date as 1968 and the place as Lagoa de Óbidos. They are, of course, only one of several non-native species that are well established here. Not only are they very numerous in Portugal but they have also spread into neighbouring areas of Spain. Clearly they have found Iberia very much to their liking and the fact that they appear to have a very long breeding season has obviously contributed to their success. 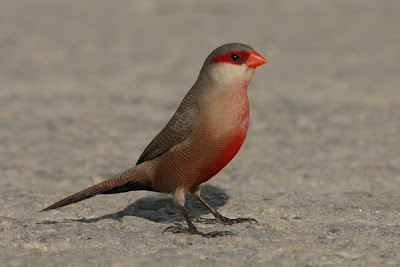 They seem to prefer damp lowland areas with dense vegetation, particularly tall grasses and reeds. No surprise then that we have so many of them along the coast here in the Algarve. We routinely see them from our window but usually we hear them first. They have a very distinctive flight call and quite often this is what draws them to our attention and we are just in time to see a small flock of 15 or 20 birds disappear into the distance or maybe just into the vegetation close by.

They can be quite confiding and when seen well are quite attractive little birds that are easily identified. They are one of the 18 species that make up the genus Estrilda, several of which are kept as cage birds in various parts of the world. The books put their length at 11-12cm (roughly the size of a Serin); the most striking features of the adult bird are the orange-red bill and the red stripe through the eye. Juveniles have a black bill. 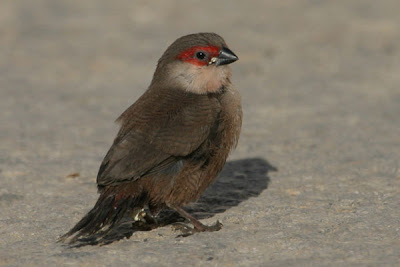 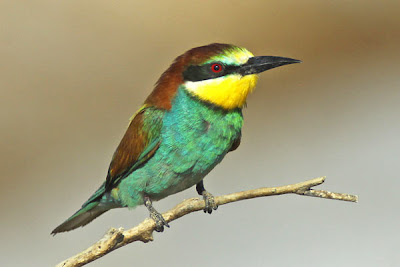 We usually see our first Bee-eaters back here in the Algarve during the third week of March. This year they were a few days later than that with the first ones seen on the 24th.

Of course it was a while after that before we began seeing birds regularly and before they began sorting out nesting territories in the local colony. By the second half of April they were busy excavating nest holes, a task that both sexes work at. The nest is in an enlarged chamber at the end of a tunnel that is typically a metre or so long - not surprising then that it can take as long as three weeks to complete! It’s tough work and the muddy beaks seen on the birds we photographed in mid-May show that work was still in progress then. 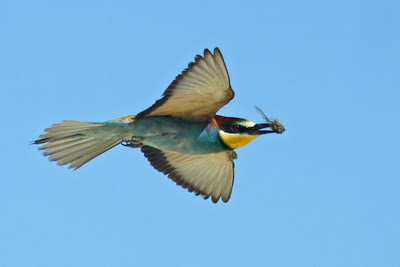 We would guess that by the end of May they had eggs – a clutch of six is typical. We’ve never seen any but, as with most hole-nesting species, they’re said to be glossy and white. Incubation starts with the first egg so that hatching is asynchronous. The incubation period is roughly three weeks. 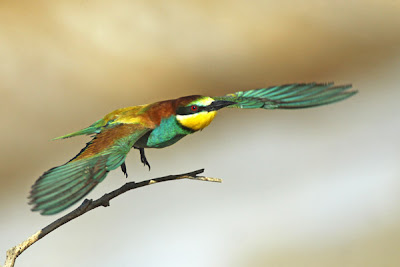 Right now they are busy feeding their young ones with a variety of insects that certainly includes a few bees but also dragonflies and various others. They no longer have to enter the nest hole, instead they are greeted at the mouth of the tunnel by the open beak of a hungry offspring! Very soon they will be fledging. 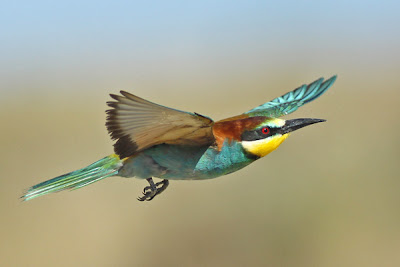 A few pairs of Audouin’s Gulls have been breeding in the Algarve since 2001 and the species can be seen here throughout the year. They are mainly nocturnal feeders, spending their days loafing on the saltpans and, as they often stay faithful to the same areas for weeks or even months, they’re easily found. 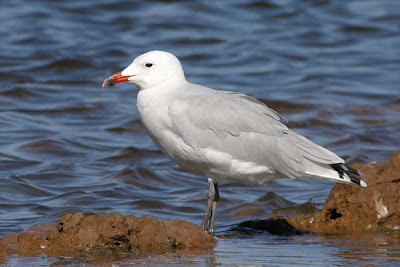 The world population of Audouin’s Gulls is now something like 21,500 pairs, a remarkable total bearing in mind that as recently as 1975 there were thought to be only 1,000 pairs. 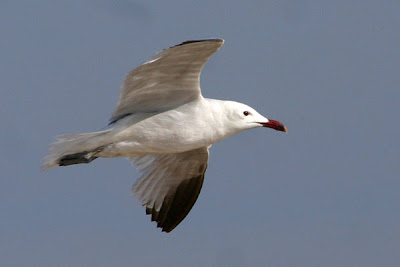 The increase in numbers is the result of the establishment in 1981 of an extremely successful breeding colony at La Punta de la Banya in the Ebro Delta in Spain. This colony, which has been extensively studied, now holds roughly 65% of the world total. As well as in Spain and in Portugal, there are breeding colonies in Algeria, Croatia, Cyprus, Greece, Corsica (France), Italy, Morocco, Turkey and Tunisia. 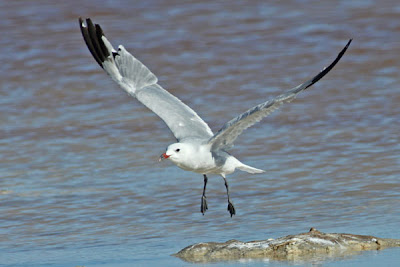 Although most Audouin’s Gulls spend the winter around the southern Mediterranean, many, particularly young birds, find their way down the coast of West Africa to Mauritania, Gambia, Senegal and Gabon. 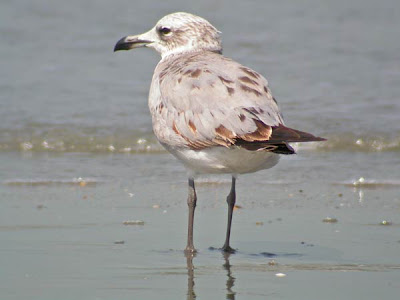 The initial success of the Ebro Delta colony was said to result from a ready supply of food in the form of discards from the local fishing industry. A trawler moratorium from 1991 to 2000 that coincided with the birds’ breeding season put an end to this easy life for the gulls but it had little effect on the colony’s growth as they sought alternative food sources and ranged more widely along the coast. The introduced American Red Swamp Crayfish, abundant in the area’s extensive rice fields, became an important food source. When fishing recommenced the renewed availability of fish waste naturally gave a substantial boost to the population.

With such a high percentage of the population concentrated at one site and dependent to quite a high degree on a trawling fishery that is considered unsustainable, Audouin’s Gull is classified as ‘Near Threatened’ on the IUCN Red List. 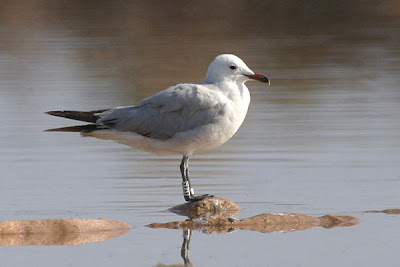 In the last five years we have reported details of about 40 darvic-ringed birds that we have seen around Tavira and Santa Luzia. Replies with ringing details and life histories are very slow to arrive but so far, not surprisingly, all have been from the Ebro Delta or satellite colonies nearby, including one from Isla Moltona, Mallorca. In the last few days we have been seeing a bird that we first reported two years ago and which was ringed as a pullus in 2002. 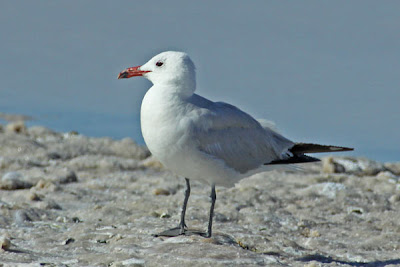 Jean Victoire Audouin (1797-1841), for whom the species is named, was a French naturalist, an entomologist, ornithologist and malacologist.

A four-hour walk around the local saltpans certainly gave us an appetite for Sunday lunch but it provided no real surprises among the birds seen. A Kingfisher was probably the least expected among about 45 species recorded. A temperature of no more than 22°C and a slight breeze made for a pleasant morning. 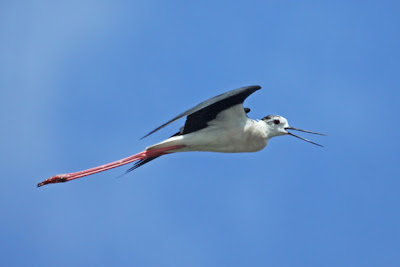 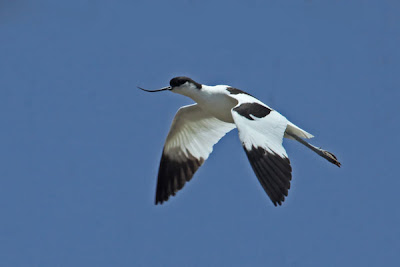 Pied Avocet
There’s clearly been some breeding success for Kentish Plovers, Black-winged Stilts and Avocets and we saw at least one juvenile Common Redshank but quite a few Avocets in particular do appear to have failed and we could find no Little Tern chicks at all. Ominously, more Yellow-legged Gulls have nested than we have seen in previous years and it may well be that there has been an increased level of predation on eggs and young birds. 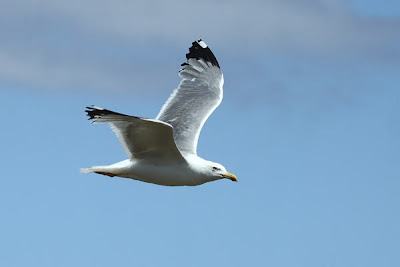 Yellow-legged Gull
Other waders included about 100 Black-tailed Godwits, plus a few Dunlin, Curlew Sandpipers, Oystercatchers and a Grey Plover. On the adjacent tidal area there were more Oystercatchers and a few Bar-tailed Godwits, Turnstones, Whimbrels and Curlews. Greater Flamingos continue to increase in number and we found a couple of Spoonbills hiding amongst them. 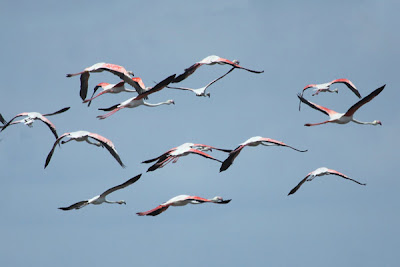 Greater Flamingos
A flock of about 25 Audouin’s Gulls included a colour-ringed bird that we had seen in almost the same place two years ago. It was ringed in the Ebro Delta in Spain in 2002. Completing the gulls were a few Black-heads and a couple of Meds. Several times recently we have seen two Slender-billed Gulls but there was no sign of them this morning. 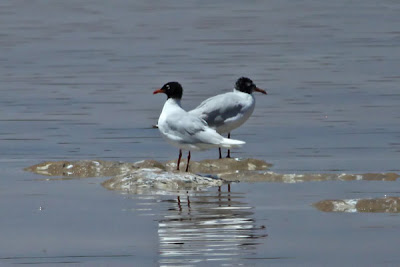 Mediterranean Gulls
Posted by Peter and June at 18:03 No comments: