The autumn rarity season in the Algarve opened with a 2nd-year male Red-footed Falcon seen near the Cabranosa raptor watch point on 8th September.  This was only the seventh record of this species for Portugal and the fourth for the Algarve.  Remarkably, a second Red-footed Falcon, a juvenile, appeared in the same area on 16th and 17th September.

A Pectoral Sandpiper was found at Martinhal on 13th September and the same day there was a report of a Marsh Sandpiper at Lagoa dos Salgados.  Photographs of the Marsh Sandpiper sparked a certain amount of debate and it will be interesting to see whether a supporting description of the bird proves sufficient to satisfy the Portuguese Rarities Committee.  Also at Lagoa dos Salgados, a White-winged Tern was a one-day bird on 17th September.

A Paddyfield Warbler was trapped and ringed at the Parque Ambiental de Vilamoura on 1st October.  This was only the second record of this species for the Algarve and the fifth for Portugal but there had been another one further north in the country just ten days earlier.  This a species that breeds mainly in Asia with the westernmost breeding population being along the Black Sea coast of Romania and Bulgaria; they winter in India and Pakistan, so definitely unexpected here. 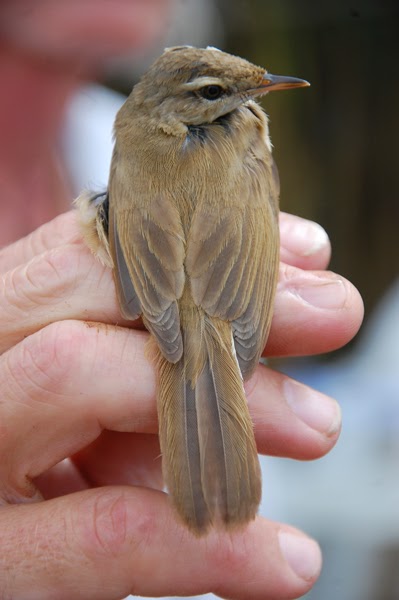 Friday, 3rd October was the second day of the Sagres Birdwatching Festival and that ensured many people were present at Cabranosa to enjoy the sight of a juvenile Pallid Harrier.  Portugal’s first record of this species was as recently as 2011 but there have since been about a dozen reports that are awaiting the verdict of the Rarities Committee.  Pallid Harriers, the vast majority of which breed in southern-Asian Russia and northern Kazakhstan, are reported to be in steep decline as a result of the destruction and degradation of steppe grasslands in the breeding range and both habitat loss and the use of harmful pesticides on wintering grounds in Central Africa and India.

There was another Pectoral Sandpiper on 6th and 7th October, this time at a wastewater treatment lagoon near Faro and most recently, on the 14th, a Little Swift was reported from the Ria de Alvor.  Eleven previous records of this species have been accepted in Portugal, four of them in the Algarve but there are several others awaiting a decision.  The only previous October record was in 1997.  Little Swift has a predominantly Asian and African distribution but there is, of course, a small breeding population in Spain.

You can keep up with news of rare birds in the Algarve on Facebook but remember that ‘rare’ in this context refers to species that are subject to review by the Portuguese Rarities Committee and that may include some that are quite common where you live!

We look forward to some more rarities in the next few weeks...