What's in a name?

If you could change the English name of just one bird, which one would it be and what new name would you choose?

There are plenty to pick from aren’t there?  Lots of birds seem to be stuck with names that are inappropriate in some way.  What about Black-headed Gull Chroicocephalus ridibundus -  a bird that never has a black head and has a name designed to confuse, a name that is simply wrong?  Obvious possible alternative names would be Brown-headed Gull or Brown-hooded Gull but those already belong to C. brunnicephalus and C. maculipennis, so we would have to think of something else.  Why not Chocolate-headed Gull? 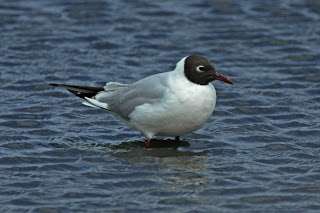 Continuing to think of birds that have names that describe them inaccurately, what about Red-crested Pochard Netta rufina?  That’s one that we find particularly irritating!  Orange-headed maybe, but never in your wildest imagination is it Red-crested!  The most obvious and striking feature of the drake is its coral-red bill – so why not Red-billed Pochard?  Maybe for some that’s too similar to Rosy-billed Pochard N. peposaca but at least it’s accurate. 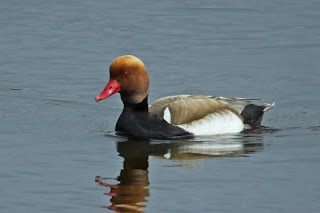 Lots of birds have names that include reference to features that may be real but which aren’t easily seen in the field or they’re features that aren’t the most obvious.  We’re thinking, for instance, of Orange-crowned Warbler, Sharp-shinned Hawk, Hairy Woodpecker and several that apparently have short toes.  And what about Ring-necked Duck?  And what about those species that have inappropriate geographical references in their names, such as Kentish Plover, Nashville Warbler, Connecticut Warbler, Sandwich Tern and others. 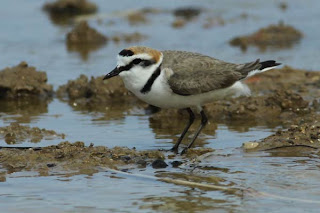 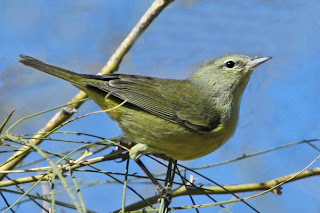 We could go on in this vein for quite a while – there are so many candidates for a name change!  However, when the International Ornithological Congress set about compiling a list of recommended English names for all the world’s birds one of their starting principles was that existing names should prevail.  In other words, long-established names would not be changed just to correct a perceived inaccuracy or wrong description.  They even quoted the examples of Dartford Warbler and Philadelphia Vireo that they had no intention of interfering with. 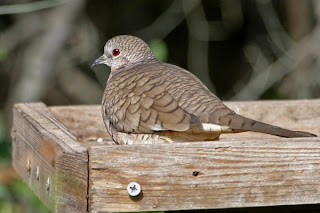 It was against this background that we were more than a little surprised recently to see a formal proposal being made to the American Ornithologists’ Union Committee on Classification and Nomenclature for the name of Columbina inca to be changed from Inca Dove to Aztec Dove.  This was based on the fact that the Inca Empire was centred on the Andes in South America whereas the range of the Inca Dove doesn’t extend beyond North and Central America.  Yes, on that basis, the name is clearly wrong but we weren’t aware of many people being offended by it and, as we have noted above, it’s only one of many candidates for re-naming and hardly a priority.  It really did sound like the proposal for change was made by someone with too much time on his hands and thankfully we’ve just heard that it was defeated.

At the same time as opting to retain the name Inca Dove, the AOU Committee also decreed that there must be more changes to the taxonomic order in which we list our birds.  In these days of DNA analysis there are bound to be such changes.  However, some of us who have spent years using field guides that start with divers and grebes and end with buntings and sparrows find all these changes a bit irritating!  If you’re still struggling to find your way around a list that now starts with swans and geese, watch out, there’s more trouble on the way!  The latest changes result from recent genetic studies that have found that falcons are much more closely related to songbirds than they are to other “hawks”!  You might want to read that last sentence again.  Yes, according to this new research, falcons' closest relatives are a group consisting of the parrots and the songbirds.  As a result, the new AOU check list sequence inserts the falcons and the parrots between the woodpeckers and the passerines.  Whatever next?  Can we expect the BOU to go along with this?  Probably. 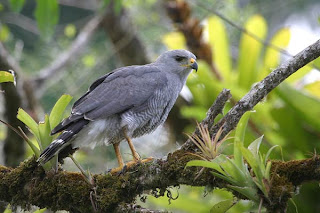 Another decision of the AOU Committee was to split what they call Gray Hawk, but which according to the IOC is really Grey Hawk, into two separate species.  These are Grey Hawk, now re-named Buteo plagiatus, which is the bird you might have seen in Arizona or Texas or as far south as the Gulf of Nicoya in Costa Rica and Grey-lined Hawk B. nitidus which is resident from southern Costa Rica south through much of South America.  For Peter this represents an ‘armchair tick’, an addition to his life list without leaving home, based on birds seen when leading more than a dozen Avian Adventures tours in Costa Rica and during an October 2004 trip to Suriname.

Yesterday’s trip to the Ilha da Barreta (also known as Ilha Deserta) wasn’t expected to produce a long bird list.  The main object of the visit (by Peter along with Ray Tipper) was simply to see the growing colony of breeding Audouin’s Gulls – more than 300 nests this year, we had been told – and to take a few photographs. 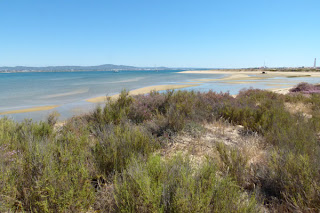 The island is one of the chain of islands that stretches from Faro to Cacela Velha, protecting the Ria Formosa from the impacts of the Atlantic Ocean.  It is uninhabited but it has 10km of beautiful, relatively quiet beaches and, somewhat surprisingly, a restaurant.  Its main attractions, however, are the unique flora and its birdlife.  It is also notable for being the southernmost point of continental Portugal. 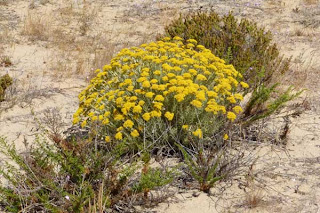 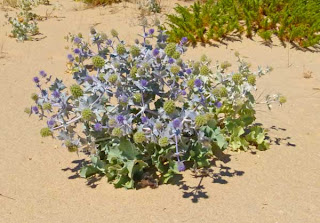 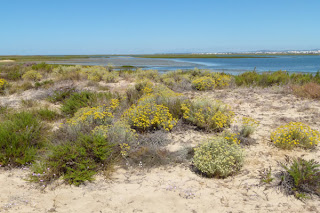 Access to the island is via a ferry from Faro.  As it caters primarily for tourists, the first sailing of the day is at 10.00am!  The crossing takes about 45 minutes and costs 10 Euros. 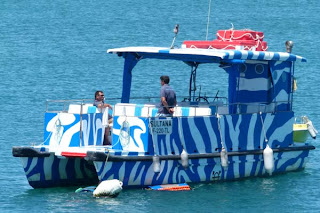 The Audouin’s Gulls were interesting to see but proved no more photographable than those we find regularly around Tavira and Santa Luzia.  As the colony grows, however, it becomes increasingly important for what is, according to BirdLife International, a species that is ‘Near Threatened’ even though the world population appears to be multiplying quite rapidly.   Yellow-legged Gulls and Little Terns were also nesting. 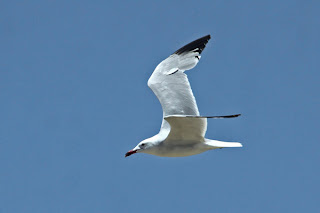 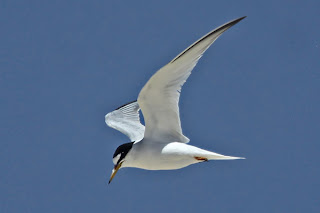 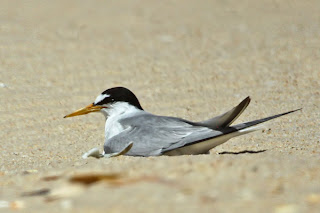 There were a few Kentish Plovers and other waders along the shore, notably a party of eight Red Knots, some of which were living up to their name in at least partial breeding plumage.  Several Mediterranean Gulls were also in smart breeding dress and we saw a few Lesser Black-backed Gulls and wondered whether perhaps they might also be breeding! 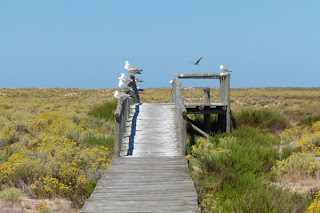 There were few passerines to be seen: Crested Larks and Greater Short-toed Larks, Yellow Wagtails, Sardinian Warblers and, inevitably, a few House Sparrows.

The island is also said to be well worth a visit at migration times and we will certainly keep that possibility in mind.

Maybe not as many clicks as we might have hoped for, but it was a very pleasant day out and a change from our regular haunts.

Two weeks have passed since we wrote here about the proposed development that threatens Lagoa dos Salgados, one of the Algarve’s most important sites for birds and birdwatchers. During that time opposition to the plans has been mounting.

However, this is far from being a new problem. Salgados has been under threat for many years. What has happened now, however, is that agreement has actually been given by Silves Câmara for this awful development to go ahead and this really has concentrated people’s minds. There is a great deal of anger now at what may be allowed to happen to this wonderful site. 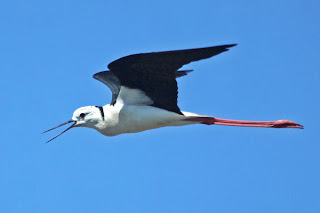 Detailed accounts of the troubled history of Salgados and the past efforts by SPEA (Sociedade Portuguesa para Protecção das Aves) and the RSPB to avert the development threat and secure Special Protection Area status for the lagoon can be read here and here. The sad fact, however, is that they have made little or no difference; their protests have been almost totally ignored.

What we now see are other local organisations joining in. Almargem and the Liga para a Protecção da Natureza both issued statements condemning the proposals within days of the latest announcement. More importantly, both have lodged formal complaints with the European Commission about Salgados, particularly regarding the failure of the Portuguese State to comply with the EU Birds Directive and afford the site the protection that it merits. 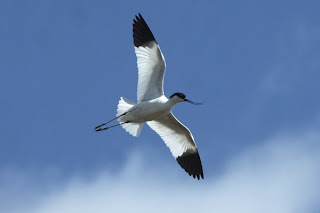 To demonstrate opposition to the development, not just from within Portugal but internationally, an on-line petition was started, which at the time of writing has gathered almost 6,000 signatures. If you haven’t already signed it, please click here and do it now.

If this proposed development is allowed to proceed, it will be a scandal.
Posted by Peter and June at 11:53 4 comments: