Spring is surely here!  It’s warmer, the days are longer and the birds are definitely getting in the mood for the breeding season.  Chiffchaffs, one of the most numerous species here through the last two or three months, are now singing everywhere, their numbers presumably boosted by returning migrants that have been much further south for the winter.  Zitting Cisticolas, with a song that is probably even more monotonous than that of the Chiffchaff, can be seen in display flights over almost any area of open grassland.  Hoopoes can also be heard; again theirs is hardly a musical song but always a pleasure.  Barn Swallows and House Martins can be seen collecting mud and starting to renovate old nests.  Great Spotted Cuckoos are courting, chasing each other around and at the same time causing alarm among the local Magpies.  How aware, we wonder, are the Magpies that they may soon be expending all their energy in raising young Cuckoos rather than their own offspring?  Yesterday, we saw our first Pallid Swifts of the year and any day now we expect to see Yellow Wagtails followed by Woodchat Shrikes and others as the migration season gets fully underway.  It all happens every year but we still find ourselves excited by it!

In the last week or so we have made further multiple visits to Castro Marim, we’ve spent quite a bit of time around our local patch, the Tavira and Santa Luzia saltpans, and we’ve been in the Castro Verde area, where Great Bustards, Spanish Imperial Eagles, Black-bellied Sandgrouse and an Ocellated Lizard were among the highlights.  Rather surprisingly, we’ve also spent quite a bit of time in the narrow, cobbled streets of Tavira town centre! 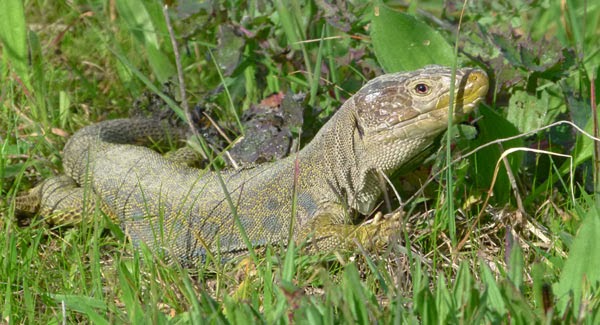 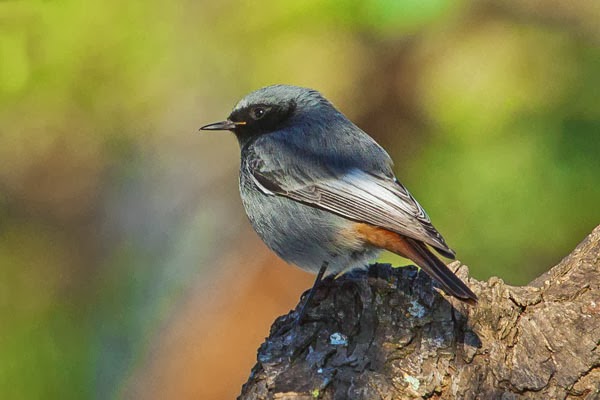 There has been just one accepted record in Portugal of Moussier’s Redstart: a bird found near Sagres on 16th November 2006 that stayed in the area for about two months, long enough for us to see it when we returned here after an Avian Adventures tour in Costa Rica!  So, when we received news late last Tuesday evening that another male Moussier’s Redstart had been seen and that it is was no more than five minutes drive away in Tavira town centre, we immediately cancelled our plans for Wednesday!  Apart from wanting to see the bird ourselves, we were also keen to confirm the sighting and the identification because we knew that there would be people who would be planning to travel here from as far away as Lisbon once they were sure that there was a chance of seeing such an extreme rarity.  Unfortunately, our efforts have so far been in vain and we have yet to re-locate the bird.  There has apparently been another reported sighting in the last couple of days but at the moment details of that are lacking.  Our only reward to date for pounding the streets has been a nice, spiffy, male Black Redstart but we live in hope!

There aren’t too many ‘rarities’ to see here at the moment but there are certainly plenty of birds and it’s good to see some migrants starting to return.

On Monday afternoon we spent a couple of hours at Cacela Velha and Fábrica looking mainly at gulls.  There had been a recent report from there of a Great Black-backed Gull but we were also hoping we might come across the colour-ringed Caspian Gull from Germany that has been seen at several sites along the coast in recent weeks.  In the event, we saw only the six regular species: Black-headed, Mediterranean, Slender-billed, Audouin’s, Yellow-legged and Lesser Black-backed.  Among them were six colour-ringed birds: four Audouin’s (three from Spain, one Portuguese) and two Lesser Black-backed (one from Norway and one from the UK). 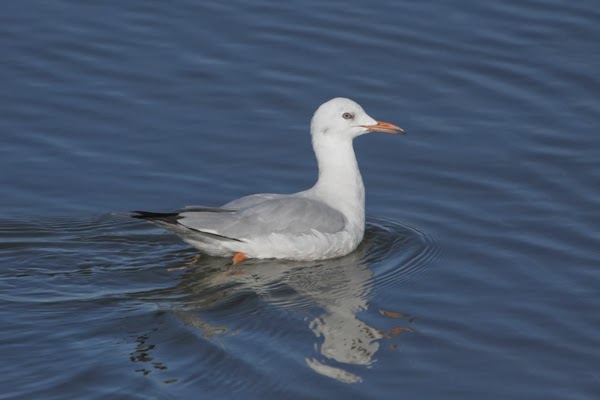 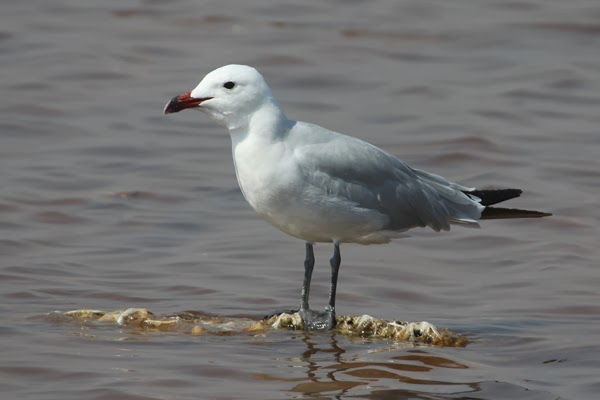 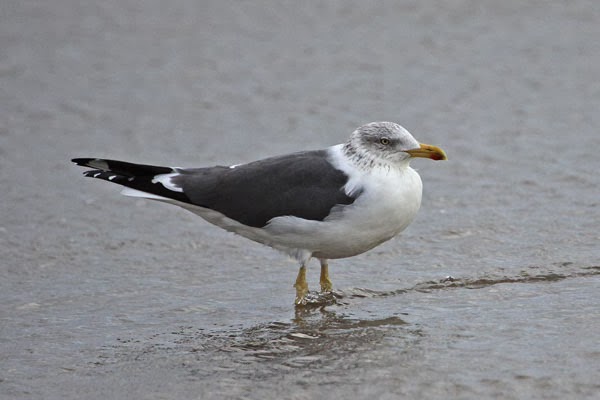 Our enthusiasm for gulls continued on Tuesday.  In spite of it being a miserable, wet day, we went to Quarteira.  There have been a remarkable number of records of Glaucous Gulls in the Algarve this winter (mostly when we haven’t been here!) including one at Quarteira in January so it seemed a reasonable place to go and look for one.  Also, there have been reports of Great Black-backed Gulls from there, not quite so rare but still a very scarce bird in the Algarve.  Again we were unsuccessful, although we did find a colour-ringed Lesser Black-backed Gull from Belgium and a Yellow-legged Gull that had passed through the hands of Thijs Valkenburg at RIAS here in the Algarve.  In the harbour, the Eider was still in exactly the same place where we had seen it on 12th January. 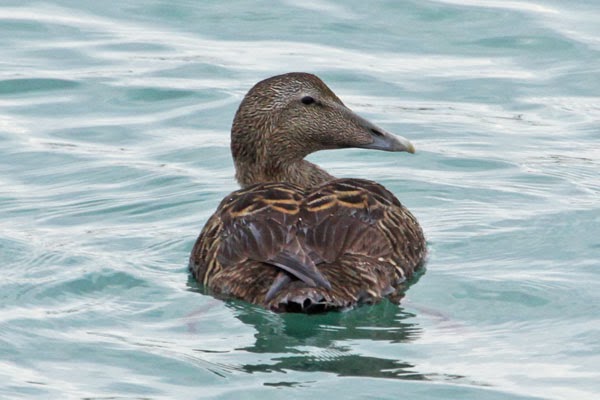 We also went to Foz do Almargem and Trafal where quite a lot of Barn Swallows, House Martins and Crag Martins were feeding in spite of the weather.  Out at sea, a few Great Skuas passed by as well as the usual Gannets.

On Wednesday we had an opportunity to show off some of our local birds to visiting birders, taking them to Santa Luzia, Tavira, Castro Marim and to the Mata Nacional das Dunas de Vila Real de Santo António.  Among the most popular of about 85 species recorded during the day were Little Bustard, Great Spotted Cuckoo, Bluethroat, Black-winged Kite, Slender-billed Gull, Black-necked Grebe, Stone-curlew and Crested Tit, some of them because of the prolonged, close-range views we were able to enjoy.  Of course, we also found time to look for colour-rings, which included one on a Greater Flamingo that we had seen before in 2010 and 2012, a bird that was ringed in 2006 in the huge colony at Laguna de Fuente de Piedra in Spain. 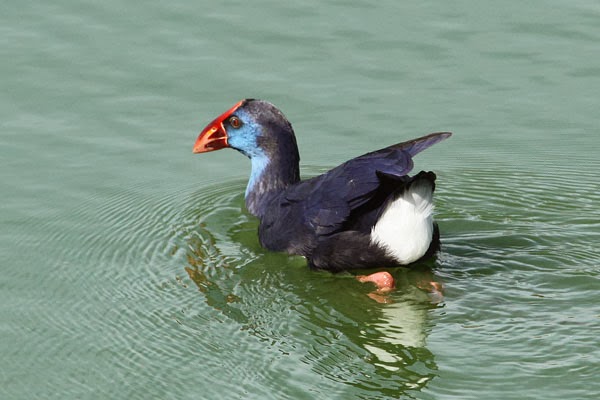 Friday was also a guiding day but this time we went a short way to the west of here, birding around Ludo, Quinta do Lago, Foz do Almargem and Trafal.  Again the species count for the day was about 85.  It was a remarkable day for raptors with Black-winged Kite, Osprey, Booted Eagle, Goshawk, Peregrine Falcon, Marsh Harrier, Common Buzzard and Common Kestrel all being seen before 10.00am!  Also notable were a first-winter Little Gull, probably the same bird that we saw at Foz do Almargem in January, and a flock of about 150 Common Scoters off Praia de Faro.  Again this is almost certainly the same flock of scoters that has been in that area for several weeks but we failed to find anything else among them.  As far as we know, there don’t seem to have been any recent reports of the Surf Scoter, Velvet Scoter and possible Black Scoter that we and many others saw with them a month ago.  Elsewhere, Purple Swamp-hens, Glossy Ibises and a Little Bittern all appeared on cue but it was a singing Short-toed Treecreeper that was named ‘bird of the day’ by one of our party, which just goes to show how we all view things differently.  It was certainly cute but for us the Goshawk was definitely the star, particularly as it was seen so well, perched for several minutes in full view.

If, like us, you have an interest in the gulls of the Algarve, you should take a look at Nelson Fonseca’s new blog, appropriately called ‘Gulls of Algarve’.