The weather has been pretty discouraging this week and there was even a day when we didn't go birding! Really - that bad!

Mostly we have been enjoying the wonderful selection of birds on our doorstep here in Tavira but we've also been to Olhão, looking for unusual gulls at the 'docapesca', to Sagres, Cape St Vincent and Martinhal, to Altura, to Fuseta and to the 'top of the Algarve' at Fóia. 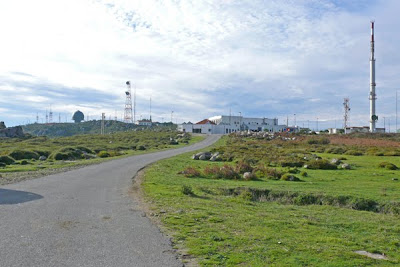 Radar, TV, radio and telephone installations on Fóia
In the Cape St Vincent/Sagres area we were pleased to find that there were still plenty of raptors; a Peregrine Falcon, lots of Common Kestrels and Common Buzzards but also ten or more Booted Eagles and at least one Short-toed Eagle. The whole area is full of birds: flocks of Lapwings, Golden Plovers, Skylarks, Corn Buntings, Spotless Starlings, Goldfinches, Linnets and Meadow Pipits; Jackdaws and Choughs; Thekla Larks, Black Redstarts, Blue Rock Thrushes and more. 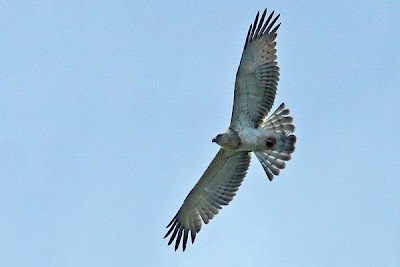 Short-toed Eagle
We also found Blue Rock Thrush on Fóia but our main target there was its cousin the Ring Ouzel. There were at least half a dozen of them, birds apparently of the central and southern European race, Turdus torquatus alpestris. They were extremely active and difficult to count, chasing each other around from one berry-laden tree to another, as if there weren't enough berries to go around. It was fun to watch but frustrating that, even if there had been enough light, we weren't able to get close enough for a photograph.

Around Tavira and Santa Luzia, we have at least 24 wader species in the saltpans and tidal channels, plus Greater Flamingos, Spoonbills, White Storks and the usual six species of gulls. Among the ducks, we have seen up to seven Common Shelducks; Sandwich Terns are common and one or two Caspian Terns can usually be found. A single Black-necked Grebe seems to have settled in to one particular lagoon and the hybrid Western Reef x Little Egret continues, also very faithful to one favourite channel. Bluethroats and Kingfishers provide regular flashes of colour. Raptors here this week have included a Black-winged Kite and a smart-looking male Hen Harrier. 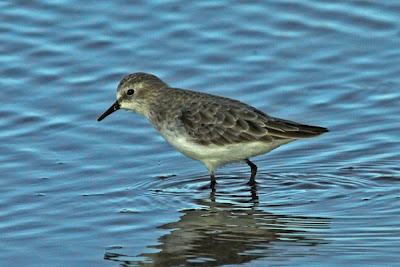 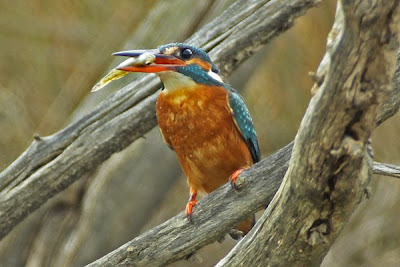 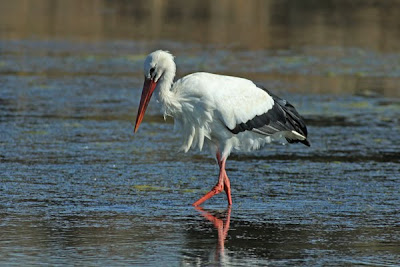 White Stork
The forecast seems to be for a further period of mixed weather with heavy rain on several days next week. No doubt we'll be doing our best to dodge the showers as usual.
Posted by Peter and June at 15:57 No comments:

We had a great day out yesterday! Lots of sunshine and plenty of birds. 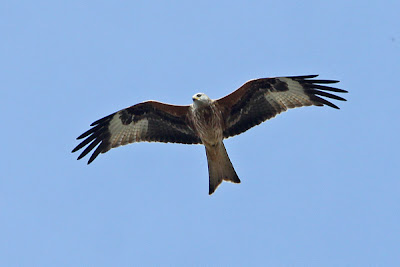 So, where do you think we were? It sounds a bit like Doñana, doesn’t it? But let’s add a few more species to the list: Great Bustard, Little Bustard, Black-bellied Sandgrouse and Bonelli’s Eagle. 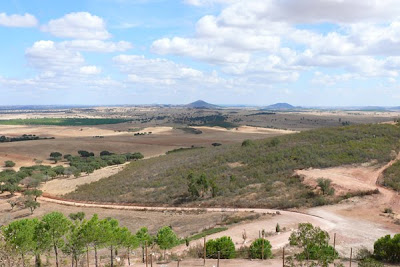 Here's a clue!
Now what do you think?

Yes, that’s right, we were in the Baixo Alentejo. No need to go to Spain when Portugal offers so much!
Posted by Peter and June at 17:53 No comments:

The Week in Pictures

We've been busy around Tavira this week where there has been plenty to keep us occupied: 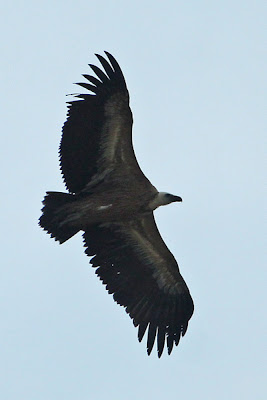 Eurasian Griffons passed over Tavira this week, presumably heading for Tarifa. About 150 were counted on Sunday. 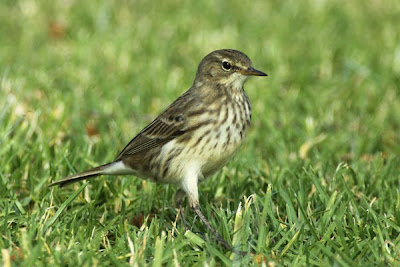 At least three Water Pipits have been regular at Pedras d'el Rei. 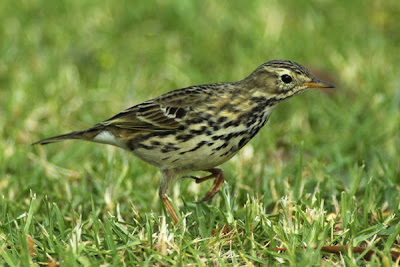 Meadow Pipits are now very numerous - but still smart little birds and quite variable in plumage. 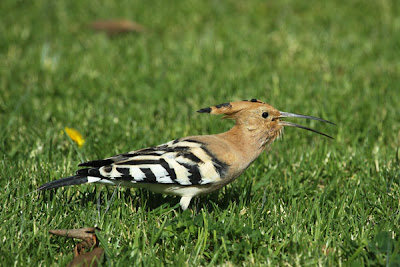 Always popular and, in spite of what some of the books say, still quite vocal in November. 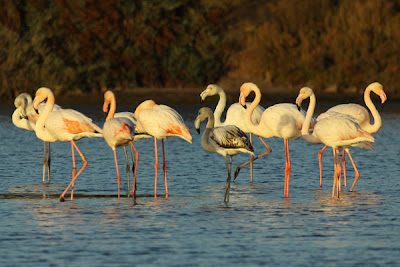 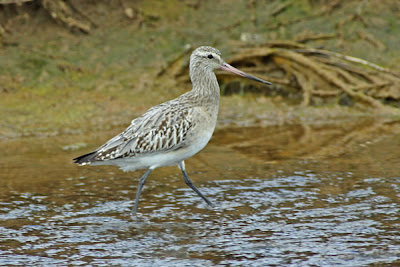 Bar-tailed Godwit - one of at least 21 wader species currently around Tavira. 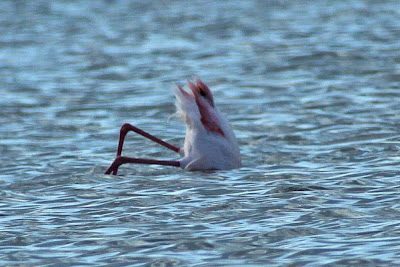 Sometimes even long-legged Flamingos get out of their depth! 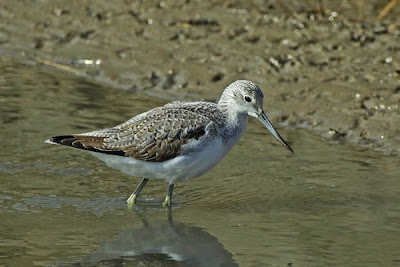 Common Greenshank - always one of our favourites! 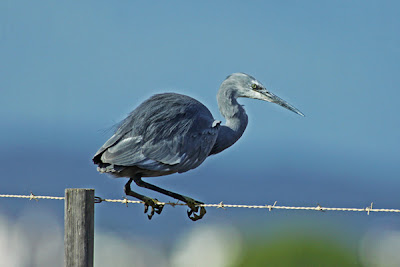 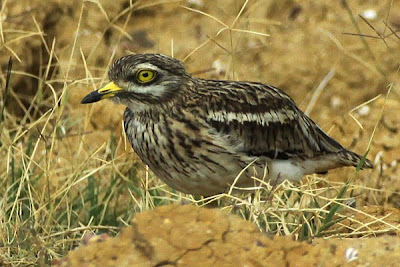 Stone-curlews are not too hard to see - if you know where to look!

Six gull species are here now and can sometimes be seen all in one place. Just two on this photograph. 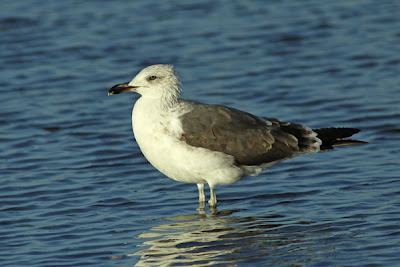 Lesser Black-backed Gull - one of the most common species around here in winter.
Posted by Peter and June at 16:09 No comments:

Flamingos in the news

Who would have thought that research into the behaviour of Greater Flamingos would be so widely reported in the news media? This week the BBC, the Daily Mail and the Telegraph were amongst those who joined Birdguides in featuring our favourite pink birds. How clever of Juan Amat and his co-authors to include a reference to make-up in the title of their paper on the use of uropygial secretions; it certainly grabbed the attention of the headline writers! You can read their full text on-line in Behavioral Ecology and Sociobiology, a Springer journal. 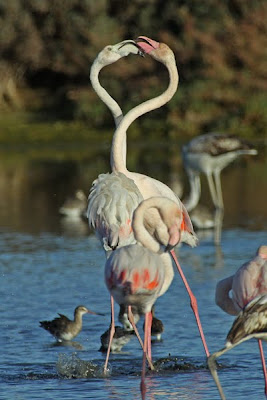 Greater Flamingos occur here throughout the year. There was a failed breeding attempt this year at Lagoa dos Salgados and there have been reports of similar attempts in the past at Castro Marim, but it is as a wintering area that the Algarve is of prime importance. 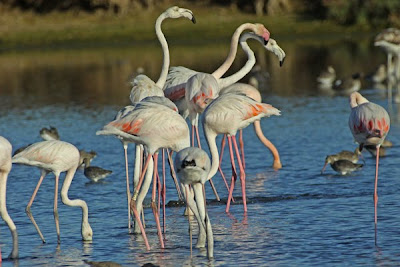 Not surprisingly, the birds we see here are mostly from the major breeding colonies in France and Spain. Most stay with us through the winter months but some carry on south and we have seen birds in Djoudj National Park in Senegal and in The Gambia that probably came from the Camargue or perhaps from Laguna de Fuente de Piedra, near Malaga. 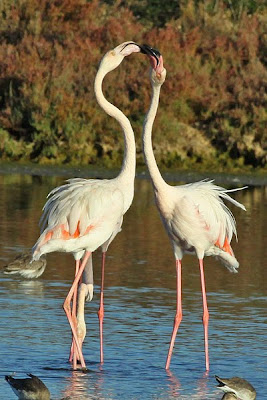 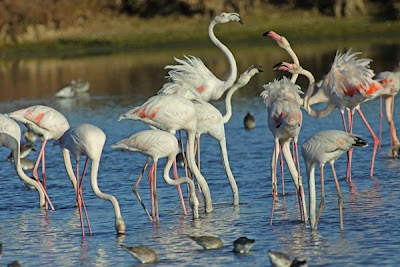 It used to be thought that Greater Flamingos paired for life – the Handbook of the Birds of the Western Palearctic says that – but the reality seems to be that many of them choose a new partner each year. Not only that but they may also choose to nest in a different colony from one year to the next. 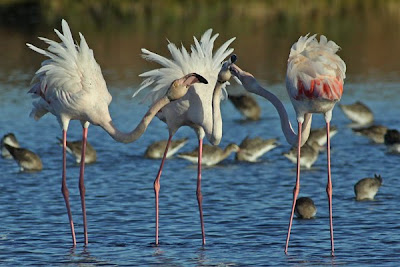 This week we watched a group of 80 birds here in Tavira that included five colour-ringed individuals, birds that had started life in France, Spain and Italy. Seeing these birds courting and displaying, it wasn’t difficult to see how the interchange between breeding colonies comes about and presumably this must be good for genetic diversity and the health of the population. Amongst the displays, we saw some ‘neck-stretching’ and ‘head-flagging’ and even some ‘wing-saluting’ but it’s probably a little early in the season for the birds to be putting on their make-up. Rest assured, though, that we will be looking out for it! 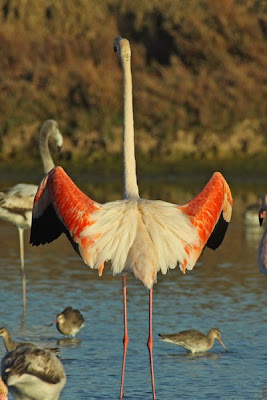