At this time of the year it is difficult to beat a day‘s birding in the Castro Verde area of the Baixo Alentejo, particularly if you enjoy seeing birds of prey.  We’ve been up there three times during the past week and seen 16 raptor species!  That’s five eagles, three kites, three falcons, two harriers, two vultures and of course Common Buzzard.  There has seldom been a moment when there wasn’t at least one raptor in view. 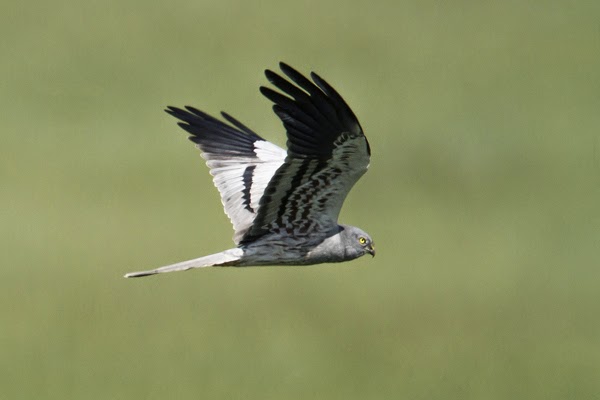 Great Bustards are easy to see; Little Bustards are easy to hear but becoming more difficult to locate as the vegetation grows.  Roadside fence posts and power poles and cables provide perches for countless Corn Buntings and Thekla Larks and a surprising number of Iberian Grey Shrikes; among them the prospect of an occasional Black-eared Wheatear, Tawny Pipit or Short-toed Lark keeps us alert.  Yesterday we found an Ortolan Bunting, which was a surprise - an unusual bird in this area and on an early date. 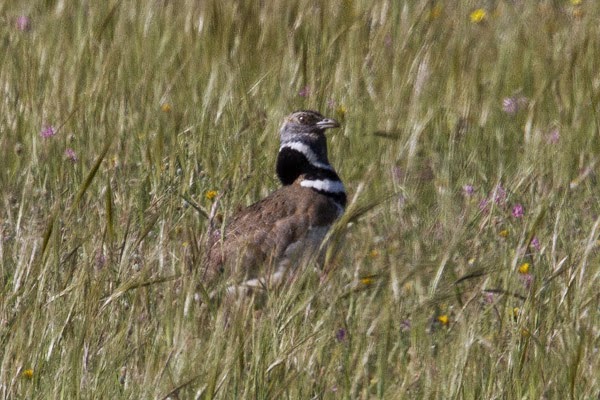 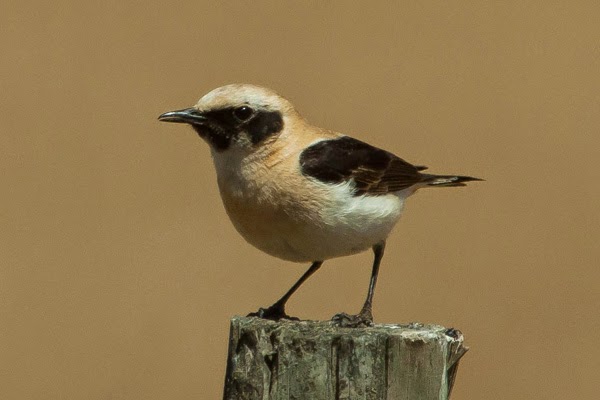 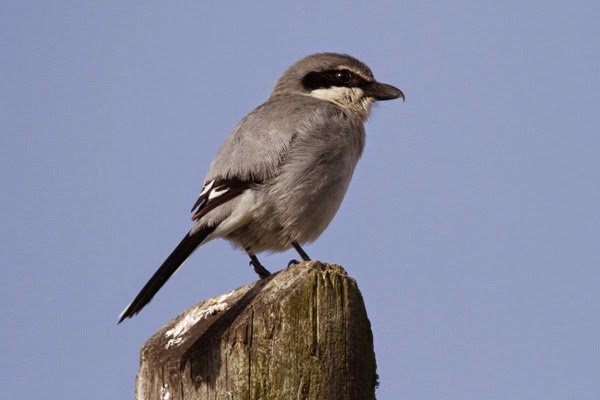 Rollers have now returned to their regular nesting areas and they are always fun to watch.  They mostly nest in artificial sites, nest boxes and the like, which are provided for them at several of the farms.  Often they have Lesser Kestrels as next-door neighbours but yesterday we watched a pair that seemed to have competition from Jackdaws.  It is easy to see how a resident species like Jackdaw might gain the advantage over a late-arriving migrant when it comes to nest site selection. 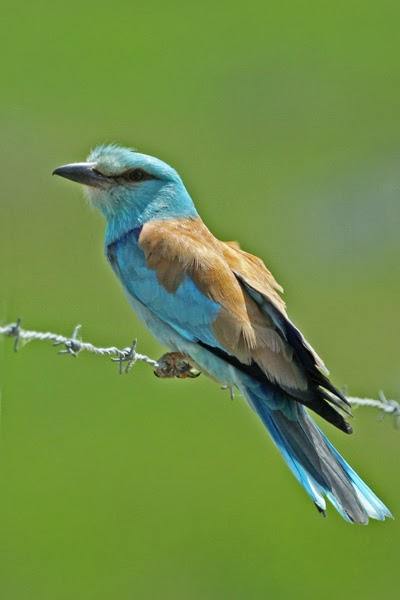 The area is dotted with small reservoirs and ponds where Little Grebes and Little Ringed Plovers are frequent and Black-winged Stilts are often found.  One or two of them have Collared Pratincoles breeding.  We have particularly enjoyed watching the Pratincoles this week.  They are such attractive birds and wonderfully confiding. 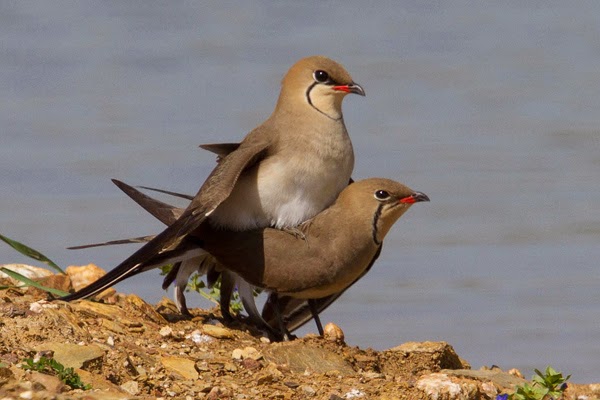 Nesting White Storks never lose their attraction and there are so many that we have given up trying to count them.  There are nests on poles, in trees and on buildings and many of them have tenants living alongside the storks: House Sparrows, Spotless Starlings and Spanish Sparrows. 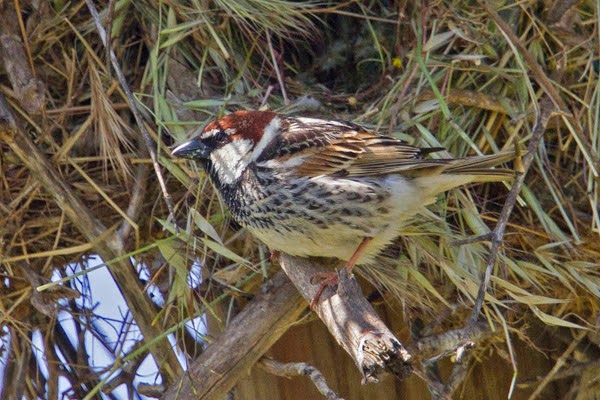 And it’s not just a visual experience!  As well as the constant jangling song of the Corn Buntings and the zitting of Cisticolas, most of the water courses with any vegetation have Nightingales singing loudly.  There are numerous Calandra Larks singing and displaying, Bee-eaters can frequently be heard passing overhead and where there is suitable habitat, often roadside eucalyptus trees, there is the sound of Golden Orioles. 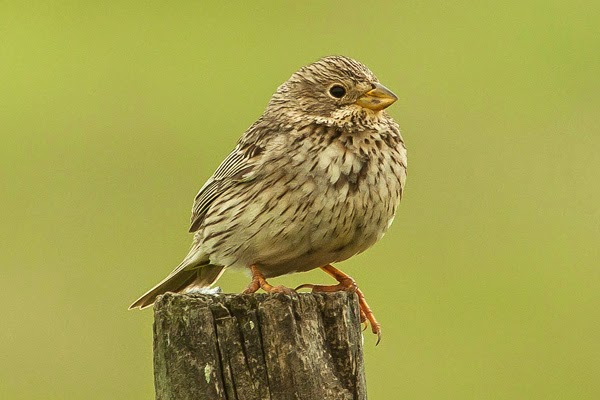 No doubt we’ll be heading to the Alentejo again next week!  Every day up there is different.

Easter birding in the Algarve

This last week our birding time has been spent mostly around Castro Marim and in the Ludo / Quinta do Lago area.  Both have been full of interest and some days it has been difficult to decide in which direction we should set off! 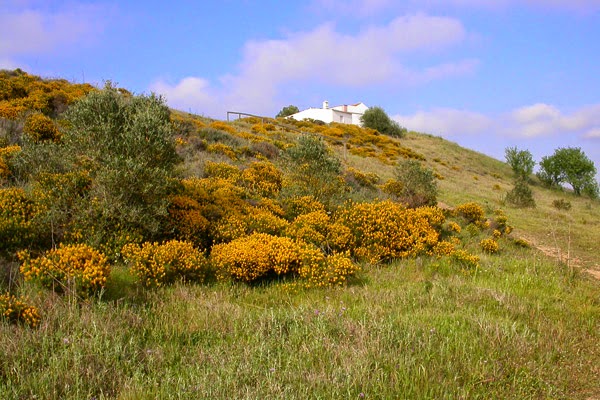 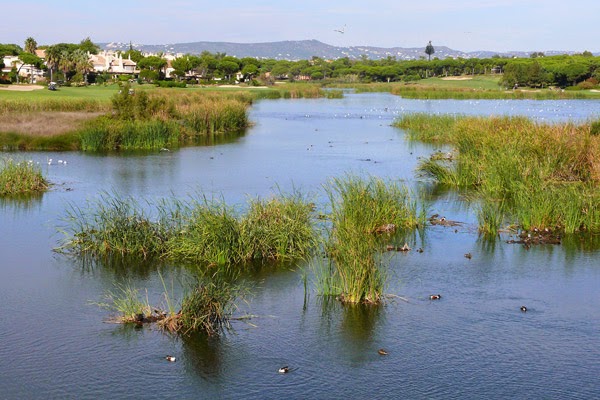 In a week which saw temperatures rise to almost 30º and a change in the wind direction, it has been great to see a variety of migrants at last arriving in numbers including Common Cuckoos, Bee-eaters, Nightingales, Northern Wheatears, Purple Herons, Woodchat Shrikes and Reed Warblers as well as the first Golden Orioles and Collared Pratincoles.  There have been Garganeys at several sites and among the Yellow Wagtails birds of the flava and flavissima races have joined the earlier arriving iberiaes. 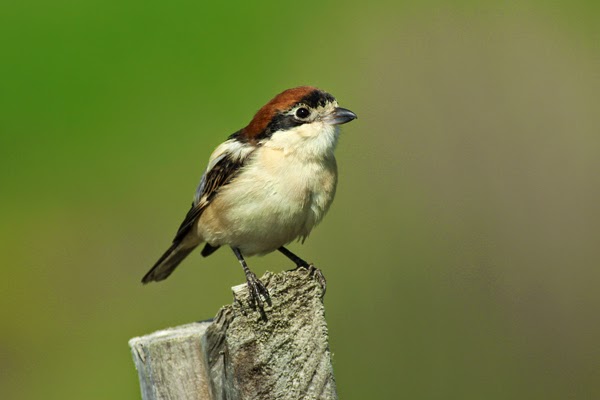 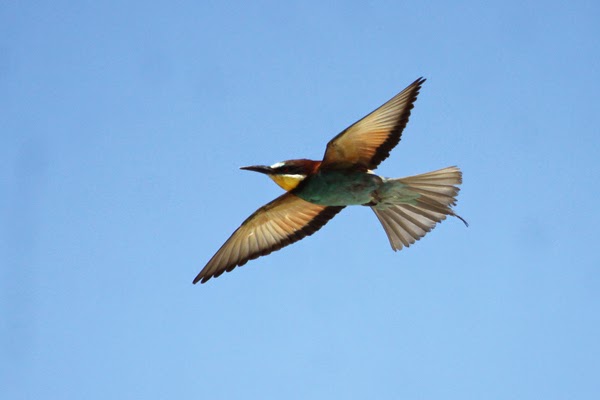 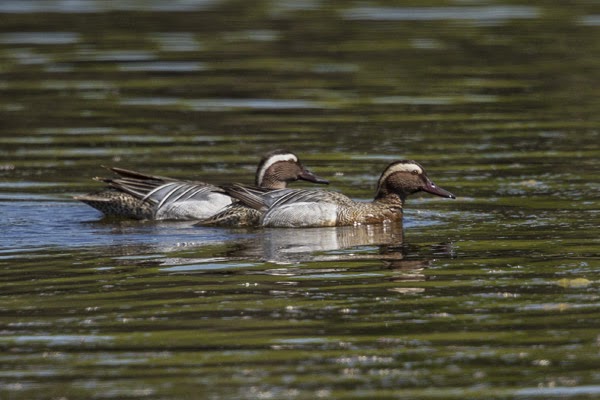 The main attractions currently at Castro Marim have been the Little Bustards, which are now displaying and easy to see.  Spectacled Warblers and Great Spotted Cuckoos have also been popular and there has been a nice selection of passage waders that has included Spotted Redshank, Ruff, Black-tailed Godwits and Greenshank.  On Good Friday we saw a Short-toed Eagle there and the wintering Osprey with the red ring on its left leg seems reluctant to leave.  Marsh Harriers are also displaying and from time to time a pair of Ravens appear. 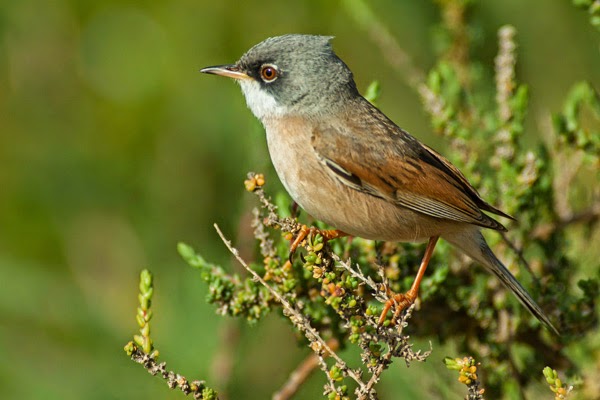 Although we have found Little Bitterns, Glossy Ibises, Red-crested Pochards and Purple Swamp-hens around Castro Marim in the last few days, these are species that are definitely easier to see In the Ludo / Quinta do Lago area.  Black-headed Weavers are now busy building nests and are also fun to watch in front of the hide that overlooks the Lagoa de São Lourenço.  The long-staying Red-breasted Flycatcher seems to have left and the Little Crakes didn’t stay very long but we have seen Wryneck, Booted Eagles, Osprey, Black Kite and Black-winged Kite as well as a few Mediterranean & Audouin’s Gulls. 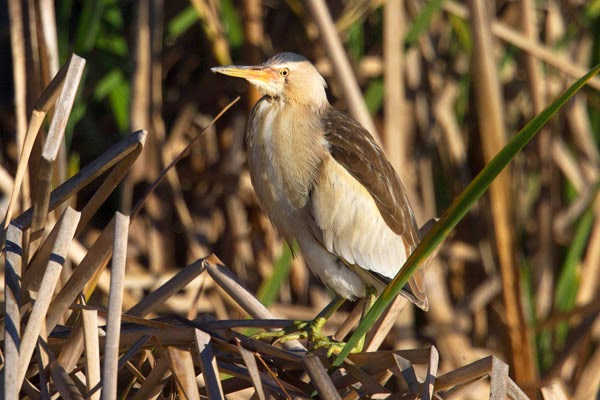 Of course, we have also managed to visit the wonderful Castro Verde / Mértola area where Great Bustards are now displaying and easy to see.  One morning we stood and watched about a dozen of them at the same time as there were also in view two Spanish Imperial Eagles, a Black Vulture, 30 Black-bellied Sandgrouse and several Calandra Larks.  It was hard to decide where to look first!  We saw 10 raptor species during the day, which really is the minimum number we would expect at this time of year.  The first Rollers are just arriving but our experience is that Black-eared Wheatears are so far slow making an appearance. 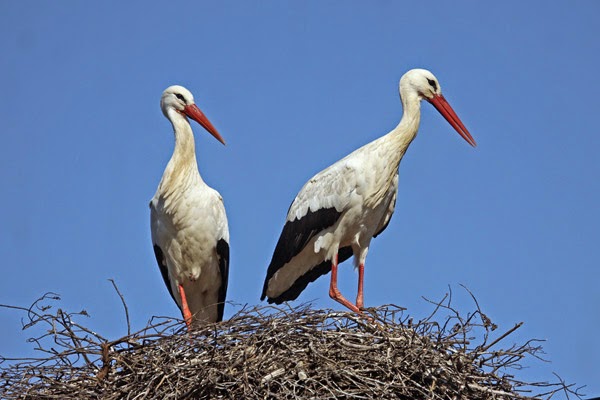 Almost wherever we go but particularly numerous in the Baixo Alentejo there are White Storks nesting.  We rather take them for granted but their black, white and red colours seen against a clear blue sky make a fine sight and we love to hear them bill-clapping.  There’s a colour-ringed White Stork nesting near Aipo that was ringed as a nestling at nearby Navarro (Castro Verde) in 1999.  It has been using the same nest for several years which is typical of the species but has been seen feeding on rubbish dumps in Spain in the dry autumn months when frogs are hard to come by.