We're just back from a fairly exhausting but thoroughly enjoyable three days at the British Birdwatching Fair at Rutland Water.

We were there to help launch the Avian Adventures 2011 brochure and to promote birdwatching in the Algarve but, as always, it was a great social weekend when we met friends from all over the world, including many who have been with us on birding tours or just had days out with us in Portugal.

All the talk (and there was lots of it!) was of birds and travel. 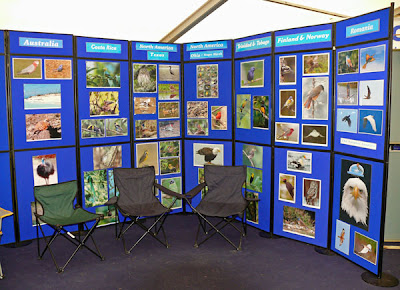 Part of the Avian Adventures stand 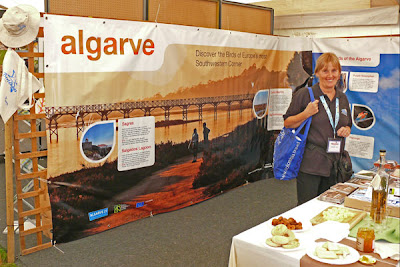 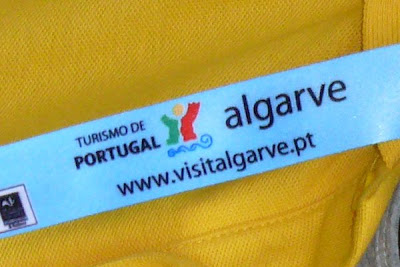 Sponsorship from the Algarve 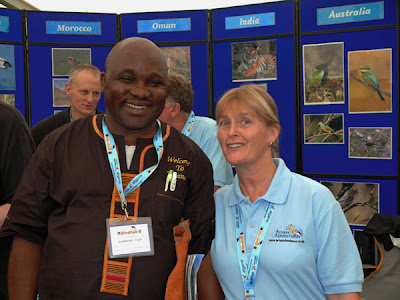 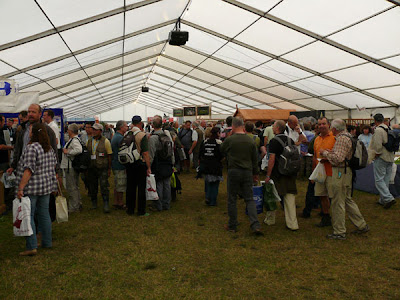 Marquee 3 - our hot and humid 'home' for three days 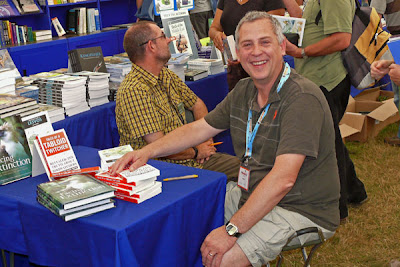 Stuart Winter signing his new book "Tales of a Tabloid Twitcher" on the Subbuteo Books stand. 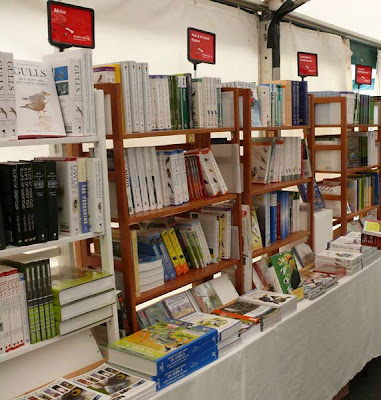 Plenty of other titles to choose from in the enormous stock of books on the Wildsounds stand. 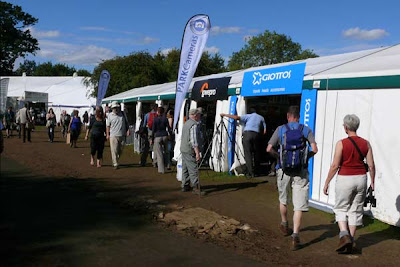 And not just books to buy, why not a new camera or telephoto lens? 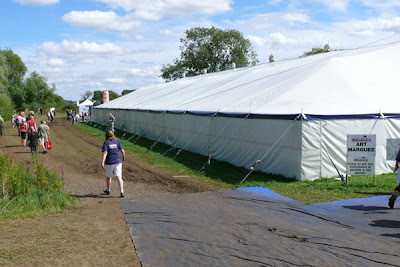 Or perhaps a painting or sculpture? This is the Art Marquee. 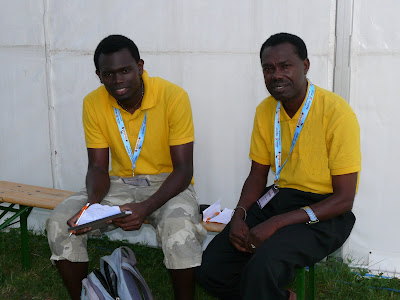 Sering Bojang and Solomon Jallow from The Gambia take a break. 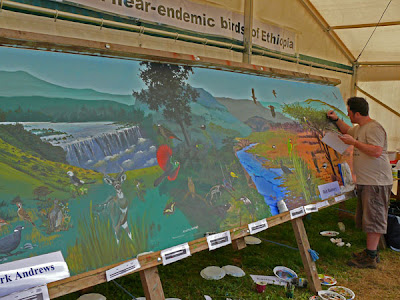 Over the years the Birdfair has raised well over £2m for conservation projects. This year the money will go to Ethiopia. More than 40 artists were involved during the three days in painting a huge mural depicting threatened endemic and near-endemic bird species in Ethiopia which will eventually be displayed in the airport in Addis Ababa.

Ethiopia is one of the new destinations in the Avian Adventures tour programme next year and the Ethiopia theme was continued when June won an African Bird Club bird identification competition and found that the prize was a copy of "Where to Watch Birds in Ethiopia".

New at Rutland Water this year was Birdfair.tv - here you can see an interview with Gerry Griffiths of Avian Adventures (with June in a cameo role...but just what was she doing under the table?).

Yesterday we took ourselves off to Gigrin Farm, the Red Kite feeding station near Rhayader in Mid-Wales that is the place to photograph both Red Kites and Common Buzzards.

We see plenty of Red Kites in Portugal, mainly in the winter, and, of course, they have become a relatively common species in much of the UK as a result of the re-introduction programme. What we hadn't managed to do with any great success was photograph them.

Although the weather forecast was good and we set off in bright sunshine, unfortunately by the time we arrived and were in position to start taking pictures the clouds had gathered. The grey sky provided an unattractive background to what were mostly flight shots but in spite of the poor light there seem to be a few acceptable images. We're still going through them but thought we would share a few here.

Quite apart from the photography, the spectacle of so many Red Kites coming together to feed makes a trip to Gigrin Farm well worth the effort. We saw no more than about 100 Kites but numbers in the winter can apparently reach 400 and more. We definitely plan to go again when we can. 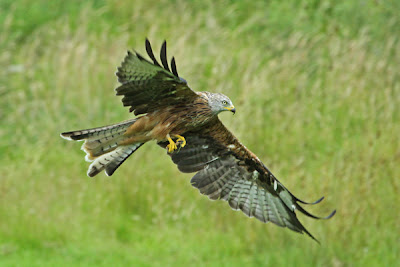 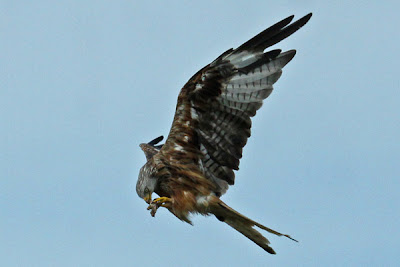 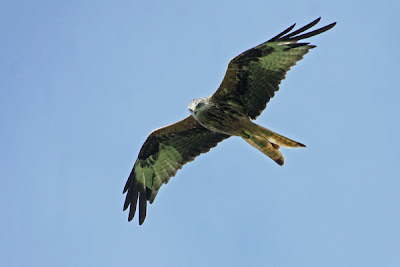 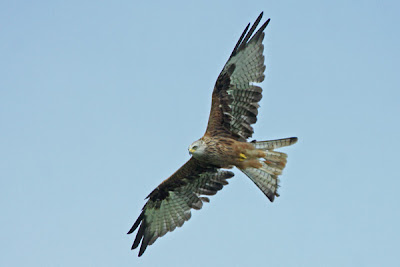 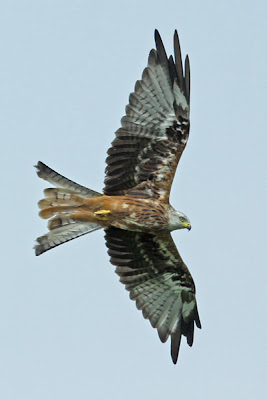 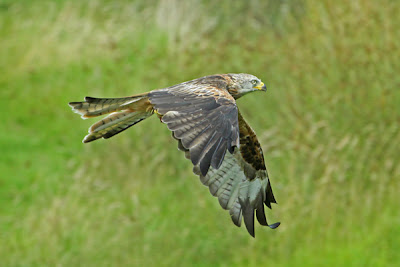 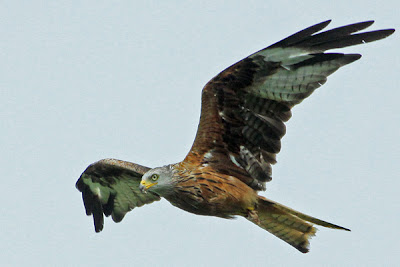 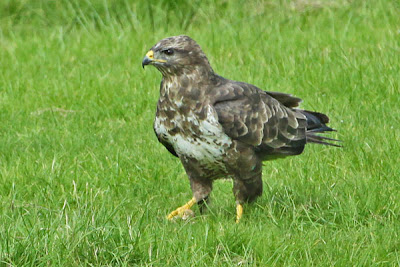 Much of our bird photography in Portugal is done from a hide or, more often, from the car. We find a likely spot, make ourselves as comfortable as we can and then wait for something to come within range of the camera. Sometimes we wait for just a few minutes, often longer - much longer.

Of course, it helps if we can be waiting in the right place and we now have several favourite sites which can be very productive when conditions are favourable. In most cases, ’favourable’ has to do with water; unlike in the UK, we have had no success at all in attracting birds to an artificially provided food source. Why is it that birds in Portugal won’t come to seed, peanuts or, it seems, anything else?

One of our last sessions in the Algarve, before we returned for a short break here in the UK, was at a pond where we have seen and photographed a good variety of species in the last couple of years. Unfortunately, on this occasion birds were few but our eventual reward was an Iberian Hare that came to the water. We see plenty of Hares but haven’t before managed to photograph one. This one we were able to watch for several minutes as it came down to drink. 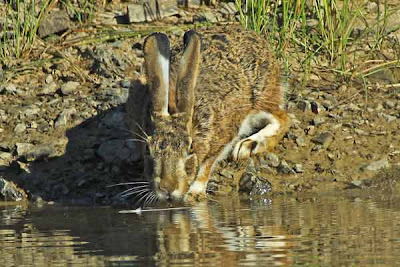 The Iberian Hare (Lepus granatensis), sometimes referred to as Granada Hare, is endemic to the Iberian peninsula and is the only Hare that occurs in Portugal. There has been debate in the past about the taxonomy and previously it was regarded as a subspecies of the Brown Hare (Lepus europaeus) that is familiar elsewhere in Europe. However, it is smaller than that species, has relatively long ears and ginger, brown, black and white fur. We're always happy to see them and were particularly grateful to this one for brightening an otherwise uneventful morning!
Posted by Peter and June at 17:37 No comments:

The Franklin's Gull that was seen irregularly at Chasewater during the last couple of weeks was thought to have moved on. However, after an absence of four days it roosted there again on Thursday and then, yesterday afternoon, we received a call to say that it had been seen at Gailey Reservoirs, just 14 miles south of here.

When we got there the bird was easily located at the edge of a ploughed field to the north of the reservoir in a mixed flock of gulls that included an adult Yellow-legged. To start with, though, it wasn't very active and was partially obscured by vegetation; eventually, just as we were getting distracted by some Rooks (birds we don’t see in Portugal) and several Brown Hares, it began to walk around a bit and then finally flew over our heads and across the road. It landed on the Lower Pool, in the company of about two dozen Black-headed Gulls, and we watched it there for about 20 minutes. By then about ten other people had arrived - although only the second Franklin’s Gull for Staffordshire, after two weeks in the area its crowd-pulling days are clearly over!

Our chances of photographing it would have been increased significantly if we had taken the 50D + 100-400mm combination. Instead we had only a Lumix FZ-50 with inevitable consequences! 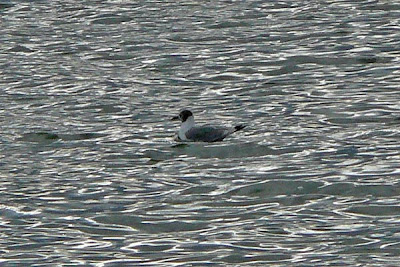 Next time take the Canon! 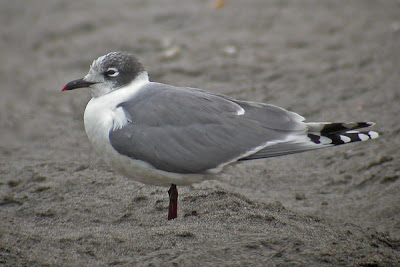 Or even a Nikon - this one was digiscoped with a Coolpix 4500 - but in Chile in 2005
According to the BOU, the scientific name of Franklin's Gull is still Larus pipixcan but in 2008, on the basis of genetic data, the American Ornithologists' Union switched the species to the genus Leucophaeus and so in the Americas it is now referred to a Leucophaeus pipixcan. This was part of the shake-up of the genus Larus that also resulted in Slender-billed, Bonaparte's and Black-headed Gulls (amongst others) being assigned to the genus Chroicocephalus. There was a time, not so long ago, when we became mildly irritated by occasional attempts to change the English names of birds but at least we could rely then on their scientific names being constant. That was before we knew anything about mitochondrial DNA. Now it's hard to keep up!

Incidentally, in case you were wondering, regarding pipixcan, A Dictionary of Scientific Bird Names (Jobling 1991) states:

According to Hernandez (1615), Historia avium Novae Hispaniae, pipizcan was the name given by Mexican Indians to a sort of gull (cf. Spanish apipizca, a gull).

So now you know!