We were pleased enough last Saturday to start 2016 with a couple of hours birding around Tavira and Santa Luzia, a session that produced 66 species.  These included an Osprey, 36 Stone-curlews, two Slender-billed Gulls, two Caspian Terns, a Bluethroat and four Black-necked Grebes but the highlight for us was probably a Dunlin, one that carried a combination of colour-rings that indicated that it originated from Svalbard in the Arctic Ocean.  We read and report a great many colour-rings but mostly they are on Greater Flamingos, Spoonbills, various gull species and larger waders such as Black-tailed Godwits; we don’t see many on waders as small as Dunlin and few from so far north.  We sent a report straightaway and now await formal confirmation and full details of a bird that unlike us has probably seen a Polar Bear!

The following day brought an even better New Year present.  We had switched our attention to the Castro Marim area and having been to Cerro do Bufo and Venta Moinhos we decided to visit the Coastal Dunes National Forest, near Monte Gordo.  In particular, we like to take a look at a small lake there which in the past has sometimes produced something unusual.

On this occasion the little lake exceeded all expectations!  We usually see Common Pochards and Northern Shovelers on the water and sometimes Red-crested Pochards or even a Ferruginous Duck but almost the first bird we saw was a Bufflehead.  Yes, a Bufflehead, a North American duck that has only been recorded once before in Portugal! 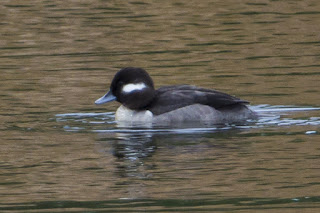 We have both seen this species many times in the USA (also in Nottinghamshire and Staffordshire!) so the identification was easy enough.  We very quickly took a few photographs, sent some text messages to spread the news and then as it began to rain quite heavily we headed back to the car.  We were there watching the bird for probably no more than about 15 minutes, if that.  It was all a bit surreal!

It was inevitable that there should soon be some doubts expressed about the origin of this bird.  Records of exotic wildfowl are always subject to debate, quite often from those who haven’t seen them!  Did it have any rings on it?  Were there any signs of its flight feathers having been cut?  Did it show any fear of human presence?  These were valid questions and understandable from anyone contemplating a long trip to come and see it but it in the short time that we watched it, the bird gave no indication that it might be anything other than a genuine transatlantic vagrant.

There was also discussion about its age and sex.  Is it an adult female?  Is it a first-winter male?  Is it an immature female?  This doesn’t seem easy to resolve.  The key feature seems to be the wing pattern as described here and it’s easy enough to see if you have the bird in your hands!  Seeing that detail on a bird that is mostly swimming and diving is very difficult and the best chance may eventually be from photographs. 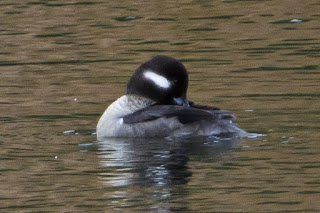 There was a report on Monday that the duck had gone missing but that it had been relocated about 2km to the east on a wastewater pond at Altura.  On Tuesday, we went to take another look and found it back at the original site in the National Forest.  On Thursday it was again at Altura and we watched it for almost an hour during which it was quite active, frequently diving and on several occasions it got up and for no obvious reason flew across the water to resume feeding in a different area.  It still gave no reason to think it might be an escape.  It was reported again from Altura today.

During the week quite a number of the Algarve’s birders have been to see the bird and no doubt this weekend will bring more birders from further afield.

Buffleheads are members of the genus Bucephala and therefore closely related to the goldeneyes.  They breed around wooded lakes and ponds in Alaska and Canada and migrate south to spend the winter in the ‘Lower 48’ where they favour the coasts and large bodies of water, particularly shallow saltwater bays.  They feed on crustaceans, molluscs and insect larvae.

They are quite small (length 32-40 cm, wingspan 55cm) and are able to nest in the disused tree cavities made by Northern Flickers.  These holes are usually too small to be used by Common & Barrow’s Goldeneyes and the main competition for nest sites is said to be from Mountain Bluebirds, Tree Swallows and European Starlings.

The previous record of Bufflehead in Portugal was in 1993 when a female was seen in the Sado estuary for ten days or more in January and February.  Maybe if this latest bird stays there can be agreement about its likely origin and about its age and sex.