Peter writes:
I’ve just returned to the Algarve after almost four weeks away which included leading another Avian Adventures tour in Northern Tanzania.  I say ‘another tour’ because this was my sixth time in Tanzania, but this wasn’t just another tour this was to see the wonderful Serengeti, the marvellous Ngorongoro Crater, Lake Manyara, Tarangire and Arusha National Parks.  It may be an itinerary that has become familiar to me over the past few years but this is undoubtedly one of the world’s great wildlife destinations and one I always look forward to visiting.

Having said that, it’s almost inevitable that while I’m away, at least one or two interesting birds turn up in the Algarve and this time was no exception.  I was only a couple of days into my trip when a Eurasian Bittern was reported from Parque Ambiental de Vilamoura.  There have been only a handful of records here of this species and it’s one that June and I have never seen in Portugal.  June went with Ray Tipper to look for it and although they didn’t see it they had more than a little consolation when instead they found a female Little Crake.  Then the next day a male Little Crake was found at Quinta do Lago.  I was slightly miffed even before I reached Tanzania!

In recent years there have been several records here of Little Crake, most of them at Quinta do Lago and usually following periods of easterly winds.  We have seen them a number of times, most recently in 2015 when we blogged here.

Yesterday we went to Parque Ambiental de Vilamoura optimistically thinking that the Great Bittern might still be there and to Quinta do Lago hoping to see a Little Crake.  We did at least have partial success.  We failed to see a Eurasian Bittern but I was pleased that the Little Crake remains at Quinta do Lago after three weeks even if it seemed to do everything possible to avoid being photographed. 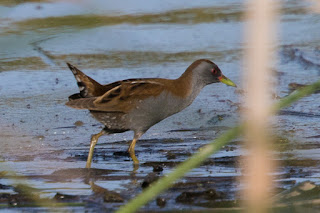 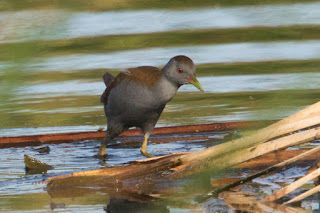 There has been speculation in the past about Little Crakes possibly breeding here.  They can be such difficult birds to detect and previous records include a juvenile in September 2009.  Although we are not aware of any female being seen this time at Quinta do Lago, the present long-staying bird does put in mind the same thought.  And what about the Eurasian Bittern?  Is that a species that might breed here?  Vilamoura would certainly be the place for them.

I will be away again during the first half of May – that should be a good time for more rarities to show up!

We saw a bittern in February at dusk from the hide at Villamoura reedbeds. Witnessed also by Carl & Julie Mason. Didn't realise they were a scarce item in the Algarve.

Thanks, Rob & Anne. That's interesting. It wasn't until the middle of March that anyone reported seeing a Bittern there. Maybe it had been there all through the 'winter'. There have been fewer than a dozen previous records in the Algarve.